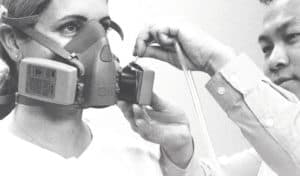 OSHA has stated that they do not certify the devices used in performance of the fit tests, but do certify the Fit Test Protocols.

The AccuFIT9000 has been designed to meet the requirements of the Condensation Nuclei Counting Fit Test protocol as described in 29 CFR 1910.134

(f) Fit Testing All employees using a negative or positive pressure tight-fitting facepiece respirator must pass an appropriate qualitative fit test (QLFT) or quantitative fit test (QNFT). Fit testing is required prior to initial use, whenever a different respirator facepiece is used, and at least annually thereafter. An additional fit test is required whenever the employee reports, or the employer or PLHCP makes visual observations of, changes in the employee’s physical condition that could affect respirator fit (e.g., facial scarring, dental changes, cosmetic surgery, or an obvious change in body weight).

The fit test shall be administered using an OSHA-accepted QLFT or QNFT protocol, as contained in mandatory Appendix A.

One of the requirements was an annual fit test of the respirator(s) using an OSHA-approved protocol. At the time of publication there were only two instruments commercially available that could perform these protocols: the Dynatech FitTester3000 and the TSI PortaCount 8020. The document listed the accepted protocols (see below) and (in parentheses as examples) the commercial instruments that could perform these protocols. Dynatech has been purchased by OHD, which has in turn been purchased by Schauenburg International GmbH. The Dynatech FitTester3000 has been obsoleted as has the TSI 8020. The instruments which have replaced them are still considered to be protocol-compliant, but are not specifically mentioned in the standards.

Here is a statement in an email from Natalia Stakhiv of OSHA to Conor O’Donnell of AccuTec-IHS dated April 27, 2017:.

“…OSHA does not approve or certify any safety equipment, such as respirators or fit testing machines. Regarding fit testing, OSHA only approves/denies new fit-testing protocols, such as the qualitative and quantitative fit testing protocols found in Appendix A of the OSHA Respiratory Protection Standard (29 CFR 1910.134).”

The Condensation Nuclei Counter Method (also referred to as the Ambient Aerosol Method) is the protocol around which the AccuFIT9000 was designed.

Get the Latest News From Accutec Right in your Inbox: